While coyotes can often be mistaken for domestic dogs when seen from a distance, there are distinguishing characteristics to tell them apart. Some of which are their pointed and erect ears and their tail which is drooping when they run. Their colors vary from a grayish brown to a yellowish gray on the upper parts. The throat and belly are somewhat white while the forelegs, sides of the head, muzzle, and feet are reddish-brown. The back has underfur and long, black-tipped, guard hairs that produce a black stripe. The tail is about half the body length and bottle-shaped with a black tip.

Taxonomy: (Canis latrans)
Spanish Name: cayote
Conservation Status: Least concern and numbers increasing.
Distribution: From North America, in Canada, down through Central America into Panama.
Behavior: From North America, in Canada, down through Central America into Panama.
Diet: Coyotes are carnivorous, but not selective in their diets. About 90% of their diet is mammalian, mostly small mammals like rabbits, squirrels, and mice. Preference is to fresh meat, but they will eat of carrion, or decaying meat, also. What helps make them successful in many different areas is that they will eat almost anything, including human trash and household pets in suburban areas.
Reproduction: Female coyotes are in heat for 2 to 5 days between late January and late March. Mating occurs within these 3 months. Once the female chooses a partner, the mates may remain paired for a number of years, but not necessarily for life. Gestation lasts from 60 to 63 days and litter sizes range from 1- 19 pups. After 10 days their eyes open and their ears begin to erect in true coyote fashion. Three to four weeks after birth, the young will start to exit the den and by 5 weeks they are fully weaned. Male pups disperse from the dens between months 6 and 9, while females usually stay with the parents and form the basis of the pack. Adult size is reached between 9 and 12 months and sexual maturity is reached by 12 months.
Threats: Because they are able to adapt easily to different surroundings and areas, they are not very threatened. But, like most wildlife, deforestation does push them to more urban areas where their lives are not as natural as it could be; eating garbage, hunting domestic pets, burrowing in old buildings. This does put them at risk for humans to injure or kill them when seen as a pest.
At Alturas: We currently are caring for one, but it is not in our sanctuary for viewing. It gets stressed with many people around and we are planning to send it to a sanctuary with a large habitat where it can live out its life. 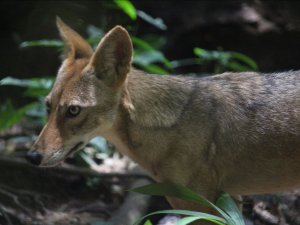