These marsupials have thick long hairs making them look disheveled. They are a greyish color but can appear more white at times. A black ring of fur is around their eyes and they have a long prehensile tail, slightly longer than their bodies.

Taxonomy: Didelphidae (Didelphis marsupialis)
Spanish Name: zarigüeya
Conservation Status: Least concern with stable populations
Distribution: They are found throughout Central and South America.
Behavior: They are found throughout Central and South America.
Diet: They are very opportunistic animals and will eat a very broad variety of foods. Their diet may include invertebrates, vertebrates, leaves, fruits, nectar and carrion (decaying animals).
Reproduction: They show a polygynous mating system. Females experience a 25 to 32 day estrous cycle, but may choose not to mate if resources are scarce.Gestation typically lasts 13 to 15 days then 2 to 20 altricial young are born.
Threats: To the IUCN red list these are of least concern. They are often seen as pests though which will cause people to poison or trap them. Their populations are strong but that does not mean we shouldn't take care of them or their environment.
At Alturas: This is one of the most common animals received at Alturas and they are often released once grown and old enough to be on their own. 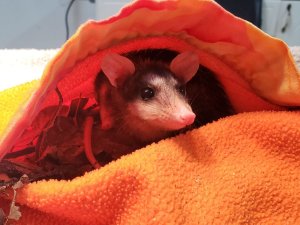