They have grey-ish brown fur with white accents on the sides. They have a long, pointed snout which is usually white in color. They have a long tail that has black and brown bands from tip to bottom and is held erect while walking. Adults weigh from 3-5kg.

Over the past few weeks, staff together with our animal husbandry and wildlife conservation interns have been trekking out to the forest to install infra-red camera traps in various sites in order to find prime locations for species-specific releases. The video footage we have received is amazing and reminds us of the astonishing amount of wildlife we have here in Costa Rica. From agoutis to packs of coatis, wild peccaries, tamanduas, and even the rarest species of all, wild ocelot’s we caught it all on tape! This video is a minute long, but make sure you watch the whole clip, it’s worth it! 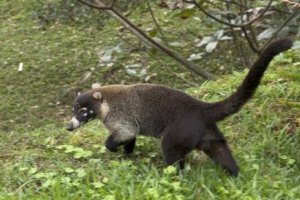